As I like to hear what others use to make their marks on paper, I suppose there are others like me. So I thought I´d say something about what I use, starting with the watercolors. (If you´re not into watercolors at all, you sure are going to yawn your way through this text…) 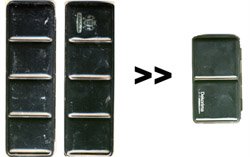 Two years ago, I had two tin boxes of watercolors. I enjoyed buying new pans of colors every now and then to experiment with, but in the end I discovered that I never used most of them. They were mostly in my way, confusing the way I mixed my colors. I must have had around 35 – 40 different colors before I decided to go a bit more minimalist. I bought myself a box that limited the number of possible colors to twelve half-pans and started experimenting with the colors I had, eliminating one by one. I´ve had this box for two years now, and I haven´t really felt the need to buy any more colors.

I have made a few small changes to it, though: After a while I got tired of the tiny size of the half pans in it (kind of messy if you´re into large brushes), so I teared out the 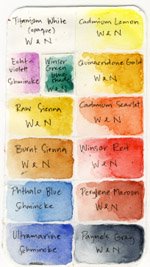 metal holder that´s supposed to hold the pans still inside the box, and glued 10 large pans and one small in there instead. I like the small sized box, in spite of it´s crowded contents. When a pan is empty, I tear it out and glue a new one in, or I fill it with tube paint and let it dry.

Apart from my main box of watercolors, I have two smaller ones. One contains only sepia and lamp black and I use it for shading when I draw with ink. It´s easier to bring watercolor than a bottle of ink if you´re drawing away from home. The sepia gives nice warm shades of brownish gray, while lamp black is more neutral.

The other small box is a new experiment. I have sometimes felt the need for an ultra-small box of a few colors that I can bring anywhere, in a jeans-pocket or whatever. And then I found this guy, John Lovett, on the Internet and saw his six-color palette and thought I might try it. I kind of like his approach to the whole thing with watercolors – keep it simple, don´t buy a lot of gear, just find what you like and stick with it. The tiny palette works quite well, actually. Maybe my usual twelve colors is too much?