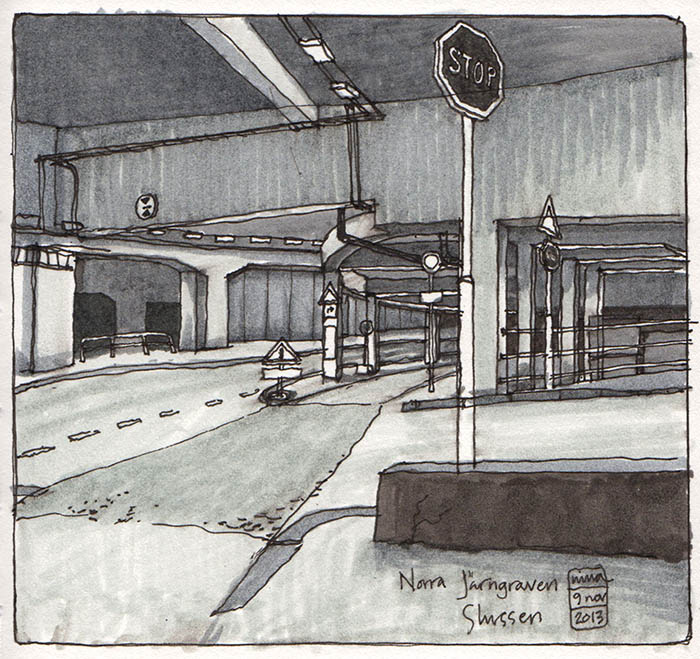 This road underneath Slussen is called Norra Järngraven, which sounds like a cool name in Swedish. A quick translation would be The Northern Iron Grave – kinda cool in a grim sort of way. But today, while sketching, I was thinking that the “iron grave” part must mean something else than the obvious – it is a bit unlikely that a traffic tunnel in Stockholm would have such a fantasy fairytale name. So, when I came home, I decided to find out it´s origins.

Turns out the “grave” part of the name comes from the Swedish word “vallgrav”, which means moat (you know, the water-filled ditch you´ll find around the typical medieval fortress city). In the sixteenth century there used to be a moat around certain parts of Stockholm, which was just Old town back then, the rest of the city was countryside. The moat was logically called the City Moat (Stadsgraven).
Also, from the middle ages and onwards, all the iron that was mined and exported from further West in Sweden, had to be weighed and controlled in Stockholm. In 1662 the iron weighing site was moved to this particular area near the City Moat, and eventually the name changed into The Iron Moat. And so, when the latest version of Slussen was built in the 1920-30s, the Iron Moat area ended up as two traffic tunnels at the bottom of all the layers of tunnels and walkways, and got the names Norra Järngraven and Södra Järngraven – Northern and Southern Iron Moat.

This is part of what I love the most about Stockholm – there is always a story behind everything you see. Sometimes a very long and old story.

Old portraits and an ink surprise