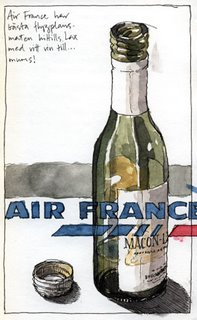 It´s been a while since I posted because I´ve been on a vacation to Paris. Wonderful as always, visited plenty of nice art supply stores, spent some time drawing, lots of time walking and just generally relaxing. Watched the Olympic games hockey final between Sweden and Finland on hotel TV with French commentators (how odd!) and almost felt a bit honored by the fact that the commentators sounded as excited over the Swedish victory as if the French would have won the whole thing.

On our flight home I tried something new – I painted this watercolor (in my sketchbook) at 10.000 meters. A little shaky here and there due to turbulence (or maybe the fact that there isn´t much wine left in the bottle…), but still – an interesting experience.