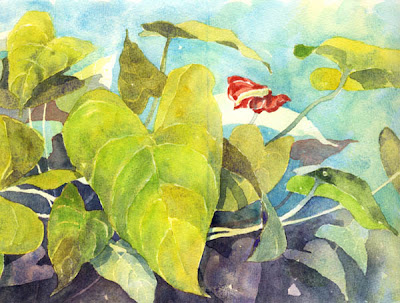 The second sketchbook project I participate in, the Maruman Exchange, is getting off to a good start, and I am really looking forward to having four Maruman folded sketchbooks landing in my mailbox in the next few months.

The participants are Anita Davies in England, Jennifer Lawson and Margaret Storer-Roche in the US, and me in Sweden. We chose to work with the Japanese Maruman accordeon sketchbooks, since they have a neat format and a paper quality we all could agree on would work. We will each fill ten pages in each other´s Marumans, and we´ll be posting scans from our books on the MarumanX blog.

What you see above is two of the first four and a half pages in my own book. I re-opened my box of Kremer pigment watercolours recently, and I used them for these particular pages. These colours are very unlike any other watercolours I´ve worked with, and the first time I tried them I put them away after a while, because I didn´t like the fact that some of the colours are very opaque. I decided to give them a second chance, though, because I like their incredibly strong and saturated pigments, and after doing a few colour mixing charts and tests with them, I am slowly beginning to get the hang of them.

Many of the Kremer watercolours have some mischievous behaviours that I like, such as granulation and biting around the edges of the paint, things you can´t really predict but that brings a lot of movement and life to the paper surface.

I won´t give up on my Winsor & Newtons and Schminckes any time soon, but the Kremer paints are really beautiful, and if you like experimenting with watercolours, these paints will be your Friends.