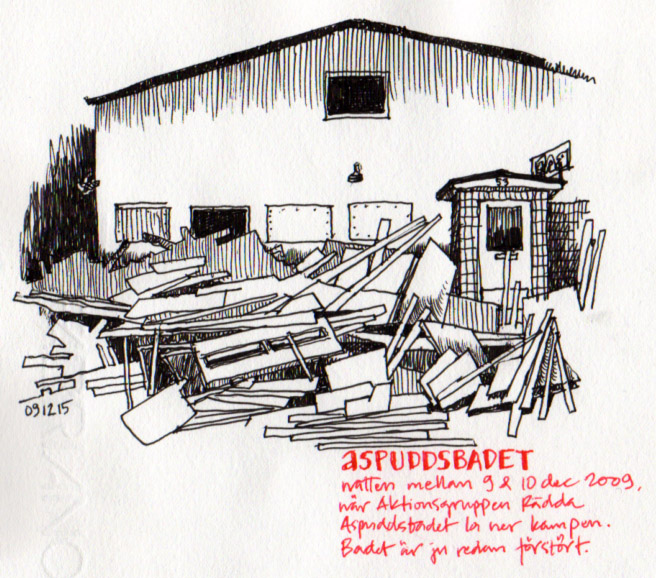 Before all the Christmas joy begins, I want to tell you how things went with Aspudden public bath, that I have posted about before. (If you missed the earlier posts, they can be found here, here and here.)

The struggle to save the bath continued outside the building after the police ended the occupation. People demonstrated, formed a Bath group to raise money, held meetings, went to Municipal government meetings trying to talk to politicians – you name it, they did it. The bath and the demonstrations around it have been mentioned in both local and national newspapers and TV news, but to no avail. The politicians would not listen, and the demolition started from inside the bath, with police guarding the outside.

On the night between Dec 9 and 10, the demonstrations to save the bath were called off. The cars parked in the middle of the street outside, to prevent the excavators from reaching the bath, were moved. At midnight a large number of people from Aspudden (including myself) marched past the police guards to lay down roses in front of the bath. A very sad moment, and many of us had tears in our eyes. A few days later the last walls of the building were torn down, and now the site is just a pile of dust and snow.

I don´t often post photos, but I just happened to photograph the bath sign on the 24th of November – which turned out to be the last night the sign was lit. I´m posting it as a little tribute to a bath that was in use the whole time from 1919 to a few months ago.

Big cities can seem so anonymous sometimes, and the people living there a bit jaded, and you often get a feeling that no one really cares what happens around them. But in this case both old and young – ordinary people! – stood up for their beliefs. In the process, a lot of people got to know each other and I know Aspudden is a few degrees warmer now, in spite of the snow. I am so proud to live in a community where people care about their surroundings and are ready to give their time and efforts to try to change things for the better.